With a generous gift in support of the Department of Radiology’s Division of Molecular Imaging and Therapeutics – formerly known as the Division of Nuclear Medicine – a Weill Cornell Medicine alumnus and his wife hope to make a significant impact on research.

Dr. William C. Klingensmith III – a 1968 graduate of Weill Cornell Medicine, as well as a 1964 Cornell University graduate – and his wife, Dr. Georgeanna J. Klingensmith, have made Weill Cornell Medicine a beneficiary of their estates with a $5 million bequest. The gift will create two endowments in the Division of Molecular Imaging and Therapeutics. It will support a professorship to be held by the division chief, as well as an endowment to be used for the chief’s priorities.

Both endowments will be named in honor of the Klingensmiths, retired Denver-based physicians who have a long history of philanthropy at Weill Cornell Medicine. Dr. Bill Klingensmith is also a member of the Dean’s Circle, Weill Cornell’s alumni giving society for leadership donors.

Nuclear medicine is the branch of medicine that deals with the use of radioactive substances in research, diagnosis and treatment.

“On both sides of our family, there is a strong history of philanthropy,’’ says Dr. Georgeanna Klingensmith. “Bill has gained a great deal from Weill Cornell Medicine, and we wanted to be able to give back in a meaningful way.”

“Alumni support keeps Weill Cornell Medicine at the forefront of academic medicine, scientific discovery and patient care,” says Dr. Augustine M.K. Choi, the Stephen and Suzanne Weiss Dean. “We are profoundly grateful for the Klingensmiths’ bequest to endow the Georgeanna J. Klingensmith, M.D. and William C. Klingensmith III, M.D. ’68 Professorship in Molecular Imaging and Therapeutics. As we look ahead, nuclear medicine will play an increasingly important role in diagnosing and treating disease.”

Nuclear medicine utilizes small amounts of radioactive materials, called radiopharmaceuticals, which are usually injected intravenously. Then, imaging machines – such as PET-CT scanners – are used to non-invasively and simultaneously image both function and anatomy anywhere in the body. This allows for precise localization of functional abnormalities. 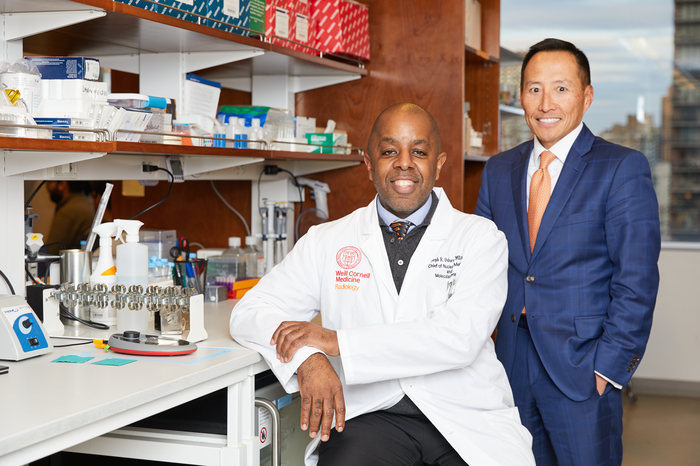 “This generous gift from the Klingensmiths will allow the division to continue its groundbreaking research in many areas that have a direct impact on patient care,’’ says Dr. Min, who is also president and chief executive officer of Weill Cornell Medicine’s Physician Organization. “As a fellow graduate of the medical college, I am proud of the Klingensmith family’s dedication to advancing our alma mater’s goals.”

“The Klingensmiths’ visionary gift will provide essential support to the Division of Molecular Imaging and Therapeutics, and help us continue to innovate,” says Dr. Osborne. “Our field is continuously developing new radiopharmaceuticals for characterizing the molecular biology of individual patients, allowing us to deliver uniquely personalized information.”

“We believe that our bequest can have the greatest long-term impact by supporting medical research,’’ says Dr. Bill Klingensmith. “In particular, we would like our endowments to be used as a source of funding for the generation of preliminary research data that demonstrates that an idea has promise.”

Historically, this is the weakest link in the process, he says. Researchers with innovative ideas must generate preliminary data to support a successful grant request. But without adequate funding, they are often unable to proceed – leaving breakthrough research stalled in the laboratory. With their gift, the Klingensmiths hope to push research forward, allowing for new discoveries that will ultimately help patients benefit from innovations in nuclear medicine.

As a medical student at Weill Cornell, Dr. Klingensmith was inspired by the institution’s dedication to research – and the thriving biomedical community that fostered interdisciplinary collaboration.